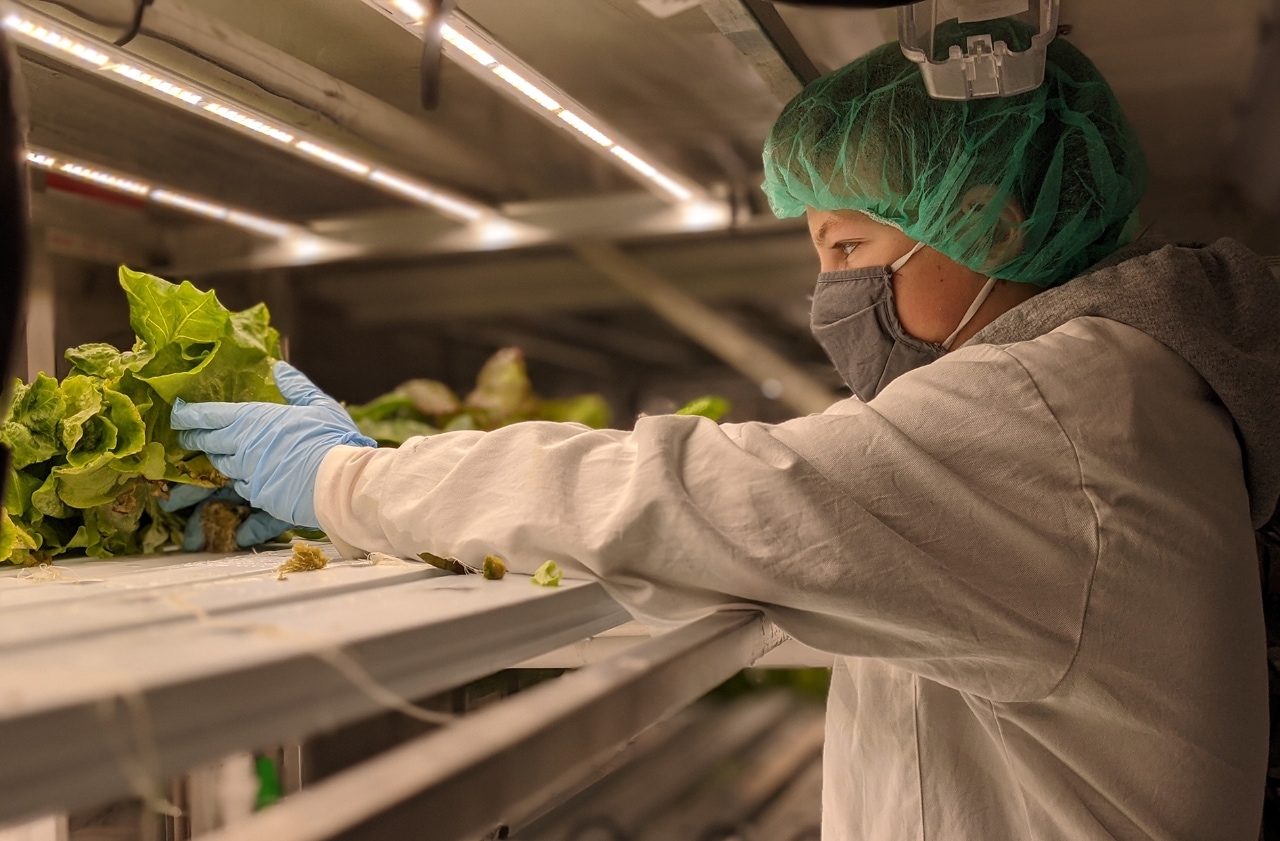 The white 40-foot shipping container sits in front of École KLO Middle School in Kelowna, B.C. Peek inside and you’ll see rows upon rows of leafy greens and herbs including basil, oregano, and parsley. Bright full-spectrum lights shine down on the seedlings, while pumps circulate water through the hydroponic farm, creating a sound reminiscent of a waterfall.

“Sometimes when I’m in there working, I’ll prop the door open and kids will come by and poke their heads in,” says Karla Lockwood, a Grade 9 teacher.

Karla is working with groups of students to run the brand-new container farm, awarded to the school by the President’s Choice Children’s Charity last year. The teachers received three days of training from The Growcer, the container’s manufacturer.

The first container farm grant from the Charity went to the students at Dene High School in La Loche, Saskatchewan, a community where access to fresh produce has been an issue. Kelowna is the opposite; it’s the country’s most abundant grower and a location with significant growing expertise. And KLO was chosen because they committed to developing a curriculum that can be shared with existing and future projects.

Both schools, however different, still have the same purpose: to provide kids with the tools to access fresh produce, whether it be growing it themselves for their communities, or developing education that can be shared with future farms. Like Hector Thiboutot Community School, next to receive a container farm from the Charity. It’s in Sandy Bay, Saskatchewan, a community with no grocery store.

So far, small groups of students from different grades and classes at KLO have been working on the farm, learning about the grow cycle, planting seedlings, harvesting, and cleaning trays. In the future, a grade 9 course focused on managing the farm will be offered as a credit.

“It’s so cool,” says Karla. “We’re all really excited about it — there are so many opportunities for learning.”

The farm can teach students about more than just ecology. From kids in tech classes, who can learn about coding from the automated hydroponics system, to art students, who plan to paint the container farm’s walls with a portrait of Okanagan First Nations’ Four Food Chiefs.

Of course, the food classes are already involved. Basil harvested from the farm is being dried to use in recipes. And children have taken produce home to their families. “They’ve been so excited to get it,” Karla says with a laugh. “It was adorable to see their faces light up over a head of lettuce that they got to take home.”

She rhymes off several other ideas for how the farm can enrich their school community. Once COVID-19 restrictions relax, the school will incorporate the produce they’ve grown into their daily food program, also supported by the Charity. The school is planning to create hampers and sell them, so for every family who buys one, another would go to a family in need. There are also discussions about creating a veggie subscription box for parents. The possibilities are endless.

“I have a lot of enthusiasm for this,” says Karla. “Having this beautiful new thing running and growing produce has been an amazing addition to our school and community. The best part, though, is being able to share what we’ve learned with other schools who receive a farm and further develop that education.”

“PC Children’s Charity believes hunger should never stand in the way of a child’s dreams for their future,” says Lisa Battistelli, Executive Director of the charity. “And that every child should experience the power of harvesting food they’ve grown themselves and cook together with the people they love.”

And that’s what Karla and the students of École KLO Middle School are doing. “That’s our dream.”